Summer implies the beginning of the holiday season for the A-listers of this world. Wealthy holidaymakers look for authentic, sophisticated, and exclusive places where they can get worthwhile experiences. While the A-listers spend most of their time working, they also know how to take significant holidays and relax in style when the time comes. Find out where the rich and famous families go during the summer.

For long, Switzerland has and still remains one of the most glamorous places for affluent families. What with the dazzling scenery, elegant cities filled with amazing art, excellent culture, and music?

This, together with a society that treasures discretion and privacy, and some astonishing seven-star hotels and you are bound to see why the wealth and famous love holidaying in Switzerland. In fact, many celebrities own property here while others prolong their holidaying season up to a year.

According to Chris Southwell, Switzerland has the best services which attract wealthy people. Property owners have done their best to enhance their services too. What’s more hotel staffs are well trained, disciplined, discreet, and respect the privacy of their visitors. They do everything within their means to ensure that visitors get maximum services and enjoy their experience. With all this impeccable service, clients are bound to come back.

One thing that stands out in Switzerland is the kind of privacy that the famous and rich families yearn for and are attracted to when they go on holiday. Unlike society in many countries, hardly do you see the Swiss people taking selfies and every now and then. Having said that, let’s find exactly where the wealthy holiday during summer.

Gstaad is a high-end resort town that lies along the Bernese Oberland area of the Swiss Alps. It’s surrounded by soaring panoramic mountains and distinguished international boarding schools. The town has since attracted the famous and rich families, some of who take prolonged holidays in the town as their children school in the prestigious schools.

The town prides itself in having some of the best winter sports schools, long trails where fitness enthusiasts can go on skiing escapades, luxury boutiques that stretch across the town center, and plenty of summer activities such as hiking, golf, mountaineering, and tennis. Celebrities have flocked Gstaad ever since the 1970s when Richard Burton and Elizabeth Taylor would frequent the town for holidays.

They even owned a chalet, a clear demonstration of their love for Gstaad. Today, the lobby of the Gstaad Palace hotel, a five-star establishment is adorned with some of the pair’s biggest photos. Popular celebrities still visit the town to date such as Anne Hathaway, Julie Andrews, Johnny Hallyday, Bernie Ecclestone, Madonna, and Valentino, a famous fashion designer among other rich and famous celebrities.

Verbier is a mountainous village situated in Valais Canton Switzerland. It’s the entrance to the 4 Vallees ski region and offers magnificent views of the  Mont Blanc and Matterhorn. Verbier is among the top ski resorts where the rich and famous families go during summer. Southwell (earlier mentioned herein) opines that everyone is interested in sampling the excellent party environment in Switzerland as long as skiing is involved.

Some of the popular names who frequent Verbier include; Jason Streatham, the Beckhams, Ronan Keating, Bono, and James Blunt. The latter owns a restaurant in Verbier, La Vache which is quite popular. Both Blunt and Diana Ross have a Verbier chairlift named after them. Some of the rich and popular people who own property here include; Richard Branson and the Duke and Duchess of York.

The Verbier nightlife features the Coco club and the farm club. One thing that celebrities love about being here is the fact that many people flock these areas making it easier for them to mask under the crowds.

St. Moritz is a luxury mountainous town situated in Engadin valley Switzerland. The town played host to the Winter Olympics not once, but twice. It has also hosted various other activities such as an outdoor ice rink Olympic, the Cresta run, and a bobsled world championship natural ice run. The town has a frozen lake where various winter sports and activities are held such as polo, ice horse racing, and cricket.

Visitors can also enjoy skiing in some of the well-manicured trails available in this town. St Moritz is popularly known as the area that invented skiing. With all this glitz and glamour going on in this town, it’s no wonder that some of the famous and rich families like to holiday here during summer.

Some of the notable people who have been in this town include; Alfred Hitchcock who frequented Badrutt’s Palace hotel every year for fifty years. Charlie Chaplin has also been a regular in St Moritz. Some of the popular people who have visited the town recently include; John Travolta, Liz Hurley, Robert de Niro, and Ivana Trump.

Affluent local residents also love the St. Moritz such as the Heineken family and Lakshmi Mittal. Some of the stunning places to see here are; Mario’s bar in Badrutt’s, the Dracula Club located at the Kulm Hotel, and the Kempinski Grand Hotel casino. The Dracula club is a private club operated by Rolf Sachs who is also the son of the late Gunter Sachs who frequented the town before his demise in 2011.

Montreux is a conventional resort town situated along Lake Geneva. The town is lies between the scenic lakeside and panoramic steep hills and is popularly known for its Montreux Jazz, a festival held in July. The microclimate in this town attracts many A-listers annually. For long, this town has been popular among families of rich and famous people across the globe.

One of the notable people who has stayed here in the past is Lord Byron and his colleagues such as Percy Shelley and Mary, who made the town their home for months in 1816. The town is home to some musical talent. For instance, Queen frontman Freddie Mercury once said that Montreux is one of the most peaceful places she knows of.

She went ahead and recorded a number of albums in the town. David Bowie also recorded some of his best music in Montreux. Other notable people who have been here include; Deep Purple, Charlie Chaplin, Ernest Hemingway, Graham Greene, and Vladimir Nabokov.

Zurich is the biggest city in Switzerland and as a result, it has attracted loads of famous and rich families during summer. Paris Hilton is said to have spent a long time in Zurich at one time when she was going steady with Thomas Gross, a local billionaire. Tina Turner is a long term resident in Zurich. She has since become a Swiss resident and has been quoted saying that she loves everything about Switzerland.

Zermatt is situated at the bottom of the highest mountains in the alpine mountain sphere. So gorgeous is this town such that one visit would not be enough for you to sample everything there is to see and do. Zermatt is a captivating ski resort which is a popular destination among the rich and famous families.

Celebrities particularly love the fact that the area is quite discreet and the paparazzi won’t be on your neck. Zermatt offers some fascinating views of the Matterhorn. One exceptional thing about this town is that only electric cars are allowed here which means visitors will be exposed to clean air and above all a healthy environment.

Frida Lyngstad from the musical group Abba lives in this town while Phil Collins has a chalet. Notable celebrities who still visit this town include; Nicole Kidman, Robbie Williams, Brad Pitt, Thierry Henry, Angelina Jolie, and Angela Merkel. Popular places to visit while here include; The Vernissage which has a bar, cinema, night club, restaurant, and a gallery, the Cervo for after ski drinks, and Chez Vrony.

Davos and Klosters situated along the Graubünden eastern Swiss canton are popularly known for playing host to the WEF (World Economic Forum) meeting. The meeting held every January attracts the famous and rich families from the business, financial, celebrities, as well as the political world.

During the ski season, many celebrities and royals flock the town. Some of the royals who frequent Davos and Klosters include; Prince Charles and William and Kate. other celebrities who have been seen here include; Bono, Renee Zellweger, and Leonardo DiCaprio.

Southwell notes that celebrities love Davos and Klosters because it’s private. What’s more, there are many private chalets and this gives them the opportunity to party with their close friends without interference.

Lausanne is the fourth biggest city in Switzerland. Many celebrities and other famous and rich families flock this city during summer. One such people, F. Scott Fitzgerald visited the city in 1930 and stayed at the Hôtel de la Paix while his wife was recovering at a local medical facility. Coco Chanel is another popular personality known to have spent a prolonged stay at the hotel Lausanne Beau-Rivage Palace.

Many celebrities as well as famous and rich families today still holiday in the places mentioned herein. Switzerland goes down in history as one of the most discreet and private places, which is why many A-listers will continue holidaying here especially during summer.

For nature lovers who enjoy the cold weather, winter is the ideal time to go camping and enjoy...
READ MORE

Spending a few days at a winter camp in Switzerland can be a fun and challenging experience. In...
READ MORE 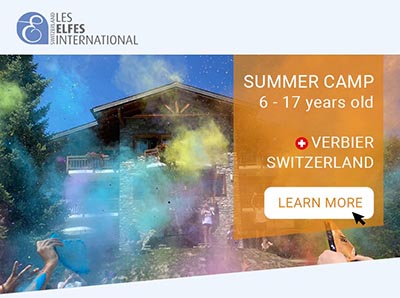 Dear Parents, another month has passed, and with it, 450 students were able to visit Les Elfes summer...
READ MORE